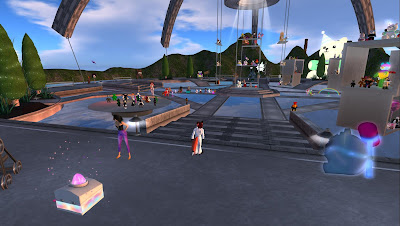 For those of you doing the "Gift Grab" from the Second Life Fifteenth Birthday from last month (described in their blog post of the event and briefly at the end of our June 22 article of The Birthday), this week's gift is found at a sim from the SL15B grounds that's either been brought back (or perhaps not closed yet): Bear Island. “Go to this location and you can see, all the bears that already be.” 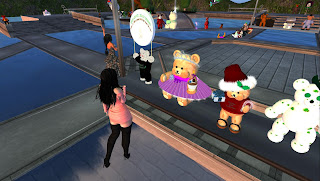 Heading over to Bear Island (170/201/21), the place looked like what I remembered it from the Second Life Birthday. For those who don't know, many Lindens carry a teddy bear with them, each having their own personal touches depending on the Linden, that residents they run into can politely ask for (if the Linden's having a busy day, your bear may have to wait). Bear Island has most of these bears, plus some special commemorative ones, such as the one given out to celebrate the one millionth resident getting an account, and the one made to promote the release of Viewer 2. 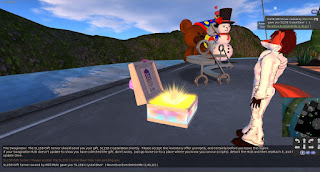 There were other residents going about the area. This week, people could grab more than just the weekly gift. One lady was saying, "I'm always pestering lindens anytime I see them for their bears, this way I can get them a bunch all at once."

In previous weeks, some chests could take a little effort to find, one week it being on the second floor of the building. The chest for this week's gift was plain to see. I had on my "Swaganator HUD" (not visible in this picture), and got the gift. 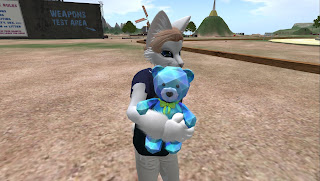 Previous weeks gifts have included t-shirts, a crystal staff, a can of "party string", and more. This week, the gift is a crystal teddy bear. Not the most cuddly-looking kind of teddy, but one can change it's color by clicking on it.

This week is Week Seven of the Gift Grab, with a new one every week. The one for the fifteenth week is available only for those who get the first fourteen. What is it? We know only that the Lab says it's a special gift.