InWorldz Gofundme Within $500 of $17,000 Goal, Questions About Future Arise 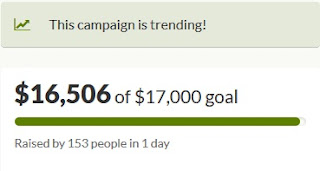 The Gofundme set up by it's owner Beth Reischl has raised most of the money it needs to stay afloat. As of the printing of this article, it has raised $16,506 of the $17,000 USD goal.

But will the money be used for it's original purpose? At Update Number Three, Reischl seemed to be saying instead of saving the grid, the money would be used to create a new one.

Wow! Everyone has been amazing! So here's where things stand. I asked in discord this afternoon, once we hit our goal, then what? What about next month? After much agonizing and upset, it was suggested by the residents that we use these monies to start a new grid. We'll be able to move OARS, profiles, groups. Inventory can only be taken that can be put in a box to be OAR filed. We'll be opening the sandbox for people who have no region to place their items and can get them back.

If you are NOT ok with this, I urge you to please withdraw your support on the page. I do not want to take anyone's money who is not ok with this! Otherwise, please start boxing your items up on your region or ask a friend or tomorrow I'll be opening the Sandboxes up for people!

Every single one of you simply amazes me!

There were some unhappy comments following this announcement.

Toysolider Thor: I thought this was to save Inworldz. Why now still abandon Inworldz and force everyone to change to a new grid? I am lost. Inworldz has a lot of invested brand recognition and many have an emotional affinity to it. I dont get it.

Lin Stamos-Valentine: So the $17,000 was NOT to pay the loan and set up a new payment platform then (as we were told)? You are using it to start a new grid and we only have a few days to save 8 years (in my case) worth of work? Even though you HAD to know long before now that InWorldz was a lost cause? Jim says no matter what the grid was closing, but I thought we could save it, but now we aren't. Did I donate to start a new grid? NO! I donated to save InWorldz. I am asking for a refund. Go ahead and get mad at me, but I feel very betrayed at the moment.

Elpida Tisagapi: Ok STOP! the fund raising was to safe IW not to make a new grid! IW is special and its the ppl and the community there that makes it special. The goal is nearly reached and will give Beth a month to sort the problems with the loan people. Moving to another grid is NOT solving anything at all! Never mind there are no full perm creators, in their right mind, who will ever give their permission to move to a new grid with NO control what so ever. I know I speak for Tao Dreamscape in this matter too. There is NO way she will agree to that. I look after Tao's store on both IW and SL (the customer service side) and please take this as if Tao herself stated it. For me its IW or nothing. Fight for IW instead of taking the easy road.

Gillian Holmes: It was not 'suggested by the residents' that you start a new grid, it was decided by a small clique of people who rudely refuse to listen to the views of others. Most residents don't even know about this yet. I think you have taken money under false pretences. The initial 'cause' has been replaced by totally different one. You should refund all donations and start again clearly stating exactly what you are raising the money for. As it stands this could be viewed as fraud.

Others were more supportive.

Hypatia Emerson: They are doing what they have to with what they have to work with. They didn't come up with the idea to start a new grid. The people on IW suggested it and talked Ele into it on Discord. She could just tell you all to go take a leap. She didn't she set up a go fund me to save our homes. The timing is too short to save the grid so she asked what to do and IW people said make a new one and transfer us over.

Tom Minor: Inworldz isn't the grid, it's the people.. and the creative spirit they share. That is what's worth preserving.

Frand Lupschen: The current discussion and I have been brought up to the current situation. InWorldz as a business has been killed by the loanshark company. It no longer has any business assets. The account is empty. So the business is really dead. What is happening now is that everyone is to put out the content they wish to keep in their regions and oars will be made of the regions. For those who do not have land, several sandbox regions will be made available. The oars, user list DB of active accounts will be retained and used to build a new grid that will use the saved content as the starting point for a new world.

So while it looks like the Gofundme will succeed, some new questions have arisen about the long-term future of the virtual world. Stay tuned for further details.

Update: As of 10AM PST, some people have withdrawn their donations, lowering the total raised to $16,211. Also, comments have appeared to have been disabled.