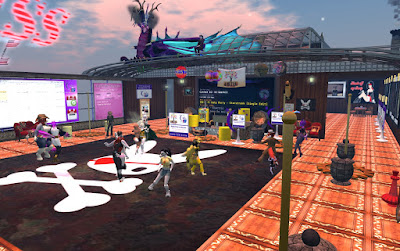 Sunday July 8 was the day of the dual-team Relay for Life event at Club Cutlass. The Sunbeamer team, whom were the team of the Sunweaver Estates of which Cutlass is the main club, were the hosts of the event. With them were members of Meli's Maniacs, whom brought their own kiosk for the event, which was placed in front of the DJ booth, besides the Sunbeamer one for the occasion.

Starting at Noon, Jenneh Thursday of Meli's Maniacs spun the music for the first hour in her small pixie avatar. At 1PM, it was DJ Geerkil, whom in his huge purple dragon avatar was too big for the DJ booth but sat overhead as he played the music. At 2PM, DJ JB took over the music. As they played, a few other Relayers such as Bain and Panza Finch dropped in. To wish the teams well, and make their own donations.