Gofundme To Save InWorldz 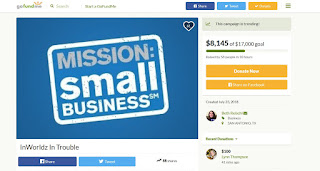 Yesterday on July 23, Beth Reisch, the owner of the InWorldz grid, announced that the virtual world was facing being shut down on Friday. But she also launched a Gofundme to try and save the place.

As many of you know, I posted this morning about current state of affairs in InWorldz. We have decided NOT to go down without a fight! But to do so, we need your support! I refunded most payments this morning via PayPal (there are still some needing refunding), and we will apply your donations to your region tier. We need $17k to get bank balance back to normal (because we paid off LoanBuilders one payment and Chase let it go through putting us in negative) and pay the servers for another month.

I know InWorldz is a home to so many of you, and I was willing to close the doors on that as I had not seen any way out of the impending doom. However, if you can donate, we can get the servers going and we'll get a new payment system in place that is not PayPal, but still allow all of our Domestic and European customers pay! I hope I can count on you and so do your neighbors! We will apply donations that match billing records as needed, just let us know which region and we'll update accordingly. Remember, if we don't hit our goal, you lose nothing! Let's hit it peeps!

As of the writing of this article, the total raised has gone up to $8290, slightly less than half of what's needed.