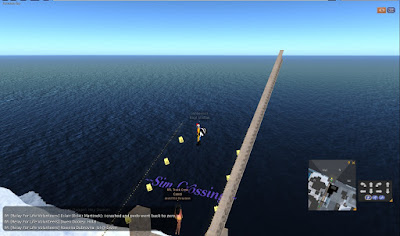 There's been more than a few comments about the lag at the Relay Weekend. Among them, "Is it just me, or is this the laggiest Relay ever?" And there are the jokes "It ain't Relay until you crash a couple dozen times," "Every time you crash, make a donation at a kiosk."

For me personally, I can't recall a time when it was this bad. I was crashing about every second sim crossing most of the time. It was much the same for others, who were continuing to find the sim ahead of them gone (like in the picture above). One friend told me among the luminaria on the side of the roads, one had been named, "In honor of the sim ahead."

Fortunately, there were options, such as dialing back on one's viewer. Though if one wants to take pictures, such as myself, one can do that only so much. And there are the music events one could stay at and not cross sims, which on my map were well-attended. And of course there was sticking to their team campsite. But if one wanted to go about the sims and take pictures, not much else one could do but restart the viewer a lot. As one friend put it, the Relay Weekend simply stretches the Second Life hardware to it's limits and only so much can be done about it.

Hopefully the lag will be better today.