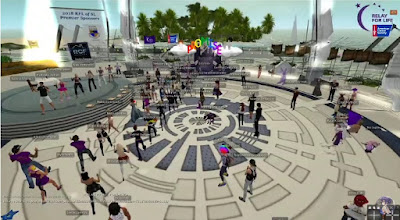 In contrast to the laggy first half on Saturday, Sunday at the Relay Weekend went smoother. There were much fewer comments about lag and crashing in chat, and the only time yours truly did was in the closing ceremony, which Jara Lowel filmed. Following that was the victory lap with fireworks in places. And after that, things wound down, with those who pulled all-nighters logging off to get some rest and people either going about the camps and designer sims at their own pace,stopping by the stages to listen to music, or going about other activities elsewhere in the Grid. 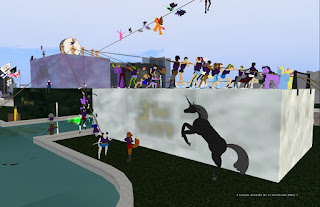 The sims will still be up several more days, and the camps and designer sims offer a number of great builds to see, such as the Sunbeamer team's camp, and that of Meli's Maniacs (pictured left) whose builds reflected the theme "United We Relay." The weekend was a great boost to many teams, Team Bonanza and the Steelhead Salmons for instance making it to Platinum rank, and Team Sunbeamer making it to Emerald. Awards were given out to several teams, to both repeat performers and some getting an award only for the first or second time. The total amount raised by the RFL in SL in general also topped the forty million mark, as of the writing of this article now at a little over 40,400,000 Lindens. 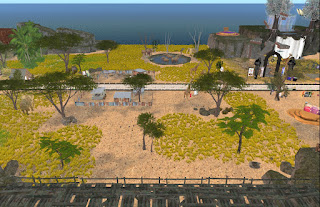 But it's not over yet. Besides the "flood party" at the Relay track later this week, some teams are still planning one last party for the season. And then there's the "Relay Wrap-Up," the final event of the season. While the event calendar has it scheduled for July 28, other sources say it will be in August. Stay tuned for more details.