Private Region Numbers Grows For Second Week In A Row


It's been about two weeks since Linden Lab put into effect their reduction in what they charge for land tiers (for non-grandfathered sims), while raising the fee to buy Linden dollars. While the Lab gave no clear reason for their move beyond "to keep Second Life a vibrant world," it's strongly believed the reason for this move was to stop the overall long slow decline in the number of sims. A recent report by Tyche Shepard, who keeps track of new sims and sim numbers in Second Life showed something promising. Total numbers of private estates show growth for two weeks in a row, 35 the past week and 34 the one before for a total growth of 69 sims. 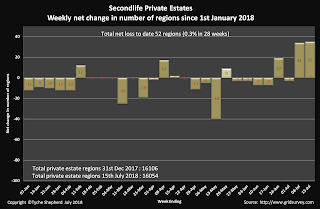 We are now two weeks into the new pricing regime for Private Estates and this is now the 2nd week of positive growth of the grid
Net Growth stands at 35 regions this week (last week was 34) All this week's net growth was among private Estates .
Overall , taking into account last weeks closure of the 24 Temporary SL15B regions , Net Change in Private Estates since the new prices stands at 94 New or Returned Regions

I've no record of Region type at the moment, and therefore no estimate of overall change in revenue for the Lab, but the initial change in demand doesn't seem enough to increase overall revenue at this stage.

Two weeks is obviously too short a time to declare the slump over, but it does raise hopes that the long slow decline, from over 25,000 in June 2010 to just over 16,000 now, might, just might, be over. We'll need at least another two weeks or so before we can say so.