This year can only be called a record-setting one for the Relay for Life's Team Sunbeamers. Time and time again, "the little team that could," has reached levels like never before. On April 18, it reached Platinum for the earliest time in a season. On May 23, it reached Jade for the first time. On June 18, it hit Platinum Level fundraising for the first time. Since then, fundraising totals have continued to climb, as of the writing of this article over 540,000 Lindens. Which is leading a few on the team to wonder, can they reach Emerald level? 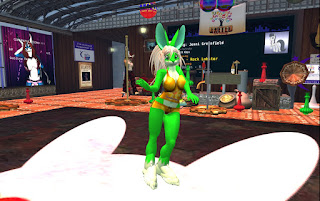 At 625,000 Lindens, or $2500 USD, Emerald level is the third highest fundraising rank, considered accessible by only by a team that's both large and quite active. But with the earlier successes this year, once again the Sunbeamers are reaching for the brass ring. this one with an emerald jewel. To help encourage donations, two of the team are putting their looks on the line once again. Team Captain Rita Mariner has offered to stay in a green bunny avatar for a month if this high rank is achieved. 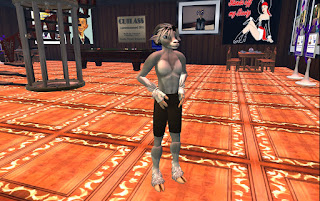 And then, there's mine. After Shockwave did a "Bid Me Goat" fundraiser, a certain someone kept encouraging me to do one of my own. So with Rita issuing her avatar challenge, I volunteered for a "Bid Me Buck."

With Emerald rank in sight, Rita and Bixyl are both stepping up one last time this year to put their looks on the line. For Bixyl, with more than a few news critics trying to get his goat, he's volunteered for a "Bid Me (Buck)" fundraiser. For every 5000 Lindens donated in the "goat" kiosk, our intrepid reporter will be with horns and hooves for a week, rounded down (9999=1 week, 10,000=2 weeks). As usual, there's a default kiosk for those wanting to keep him looking foxy. So how long will our reporter be a "ba-a-a-a-a-ad" boy? You decide by donating. 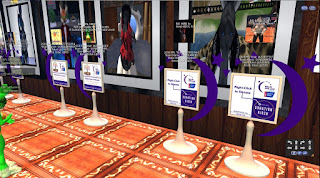 As usual, I can still be my fox avatar when it's clearly obvious I'm on Newser duty, such as interviews. But the rest of the time such as club events, it's the horns and hooves for me, "Oh well, people already think of reporters as 'butt-heads' to begin with."

The main event, the Relay Weekend, is already upon us, being tomorrow. But there's still a month left in the Relay fundraising season. While many teams just sit back at this time, the Sunbeamers won't be among them. So even if I end up taking life by the virtual horns will the "little team that could" pull it off still yet again for a third rank it's never before obtained? Why not?