Protest Against Russian Invasion of Ukraine in Moscow Island, And Other Support For Ukraine in Second Life

On Wednesday February 23, Russia launched a full scale invasion against it's neighbor of Ukraine. The result has been protests across the world against the unprovoked act of aggression ordered by Russian leader Vladimir Putin, and in support of the Ukrainians. But for those trying to protest within Russia, the results have been the demonstrations broken up by police and the protestors arrested. 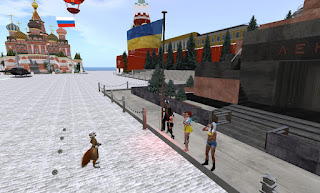 Within Second Life, there have been some protests against the invasion as well. On Friday February 25, I got a tip of one. It was appropriately enough at the Moscow Island sim, which is known for having a build of the Kremlin and one of Lennin's tomb. Near the tomb, I saw several avatars. One was flying a sizeable Ukrainian flag. Another looked bloodied and was wearing a blue and yellow dress, the colors of the Ukraine's flag. And there was one girl wearing a Putin mask, AnuAmun (AnuAmun Alchemi). "Путин должен уйти!" The girl shouted, "Putin needs to GO!"

Going over to her, I asked if there were more people here earlier. "People do come and go," Anu told me, "Some of us are gonna keep avatars here for as long as possible. There's no sim for Ukraine that I know of. And this is the only one related to Russia that looks official enough, since the actual Red Square has been closed in real life. There should be more people here. Getting the word out may help." 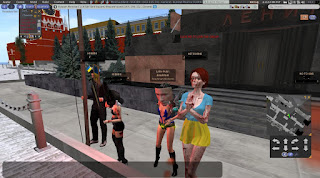 The protestor went on, "I have friends - in Russia, that fear going out in the street because of the repercussions. For some the responsibility, even though not directly theirs, weighs them down strongly. And internationally no one is placing blame with the Russian people. They are all prisoners to a criminal organization ran in part by Vladimir Putin. The economical sanctions imposed by the west are going to hurt the spectrum of the population in Russia that already hurts economically. It's the sons and daughters of Russia that are loosing their lives for the personal financial growth of Putin and the ones around him. And 60,000 Ukrainians have crossed the border into Poland and Romania in the past day.

"For Ukraine this is an existential crisis. People remember how the 'liberating army' forgot to leave after the end of WW2. No one diminishes the importance of Russia and it's sacrifice in WW2. But this is 2022. Ukraine is an independent nation that should and must choose it's own future. On a personal level - I am just of the opinion that Putin does not actually care about the lives Russia will loose, or the lives or Ukrainians or even Ukrainian-Russian ethnics in the east. His interests are in the control of however much territory he can get at the negotiating table - including the gas fields in eastern Ukraine and Odessa. And it's a bit hypocritical criticizing America or the UK for being imperialistic and then turning around and actually doing it. Little men with big egos throughout history have shaped and reshaped maps on the bodies and with the blood of the innocent and the young - this is no different. We're better than this!" 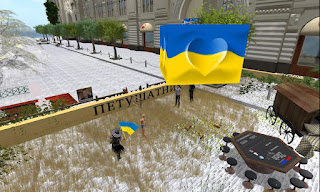 When I mentioned I was going to keep the anonymity of the protestors in the article aside from those who gave their okay, Anu told me in her case it was fine, "I am ok - in the West.  Also I am not Russian or Ukrainian , by birth I am Romanian. I do have countless friends in both countries. We're neighbors after all. And neighbors help each other, they don't invade each other.

Dropping by the next day, I noticed the protest had been moved to a corner of the sim away from Lenin's Tomb, and was smaller in number. I got a message from Anu, "We were removed from the sim! I filed a report, mass removal for protesting." So it appears the sim owner was no fan of the protests. 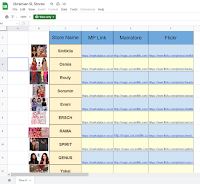 Later on, someone passed me a notecard, written by a Stephen Yuvensky, calling on people to support a number of Second Life stores owned by Ukrainians, "Ukrainian owners of the SL stores likely won't be able to create new releases in the nearest future. So I suggest supporting them by visiting their MPs and inworld stores ..." The notecard had a list of store links on Google Docs (link here). "Please note that none of the following owners asked for this list. It's fully a desire and idea of community to show our support! If you know any other designers who are in Ukraine please let me know for them to be added." More on the notecard can be read in a New World Notes article.

I would also be told about a set of Ukrainian flags (flagpole, wall mounted, desk, etc) that was being given away by Lupinia Studios, owned by Natasha Petrichor (earlier, we wrote about her Frolicking Deer Cay). You can get the flag set/fatpack for free at Marketplace (link) or inworld or practically free at 1L at Braunworth (127/245/179) and Tofte (173/120/146). Someone would also pass me a free and shareable flag.

There's quite a bit of support for Ukraine in Second Life. So we may have more on the subject soon.

For more information on the invasion of the Ukraine, one can check these links at Fox News, CNN, and the BBC.