For years, there's been talk about accessing Second Life through a mobile viewer. Linden Lab never had one of it's own, but there were third-party clients. Years ago, the best was probably Lumiya, but for some time it hasn't been updated and presumably has become unusable. A few years ago, Linden Lab started working on a mobile-capable platform. But last October, it announced it was pausing development. Development had reportedly been "stagnant" for months, presumably on trying to resolve technical issues. 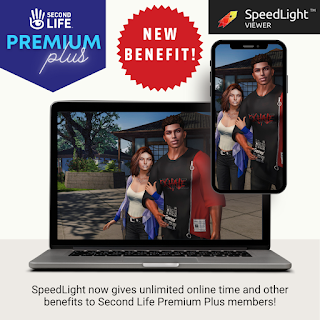 Another mobile client available is Speedlight. It's been around at least since early 2020. Earlier this week, Linden Lab announced they were partnering with Speedlight, offering unlimited time on the mobile viewer as part of it's Premium Plus perks.
The Speedlight mobile app is already popular with many of our community members since it enables Residents to stay connected with Second Life while on the go, and now Premium Plus subscribers get access to additional Speedlight benefits: no online time limitations along with prioritised online support. Now you can enjoy Second Life on your mobile devices (or in a web browser) with the freedom to stay connected as long as you like! To get these benefits, all you need to do is access Second Life using SpeedLight with your Premium Plus account.
While most of Speedlight's features are free to use, there's only a limited time one can use it per month. For more time, one either had to buy it or subscribe to a gold account. And now there's the option of signing up for Premium Plus. But how much of a perk is this? 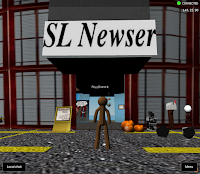 Trying it out with an alt on my webbrowser, the viewer did allow you to check where your avatar was, as well as who was around it. You could also check one's friend list to see who was on and groups, as well as nearby chat. There is also a 3D view, but it's considerably less detailed than regular SL viewers, unlike what the picture with the Lab's announcement suggests. Surroundings are simplified, and one's avatar appears as a stick figure. One can move around and jump, but there's no sound or music, and one may get stuck at a sim crossing.
In a thread in the official forums, comments were somewhat mixed, overall favorable. The one big complaint was that the picture in the announcement was misleading. A few commented the perk would probably be of best use to merchants, who could use it when away from their computer to check up on business.
The partnership between Linden Lab and Speedlight marks the second time in a month the Lab as made a deal with someone offering an SL product not owned by them. Speedlight was developed by Glaznah Gassner.
Source: Modem World
Bixyl Shuftan
Posted by Bixyl Shuftan at 6:04 AM