The Linden and Residents Snowball Fight 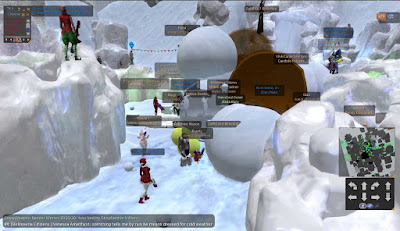 Yesterday, Monday December 19, was the day of the Linden and Residents Snowball fight. The fight took place with the Lindens scheduled to be there from 10 to 11 AM and 2 to 3 PM SL time. Yours truly never did get into the first session, which had about a hundred people around. People were saying in Bellisseria chat that with the lag, they couldn't fire their snowball launchers. Instead I waited until the second one. 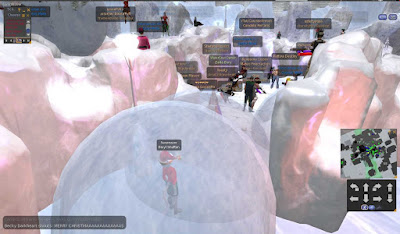 I finally got in about a few minutes before the hour was up, and all sorts of things from whales to buses to presents to yellow snowballs were flying. People were clustered around a bridge, and this was about as close as I got to it. Snowballs would either launch you into the air, or freeze you in place for a while.

Hours later, the Lab would show a video of some of the chaos that took place.
Yours truly would have a little fun, eventually going to a castle and successfully defending a tower for a while until my screen turned black and I had to reboot.
Most years, there are two Linden Snowball Fights, one in December and the second in late winter. As of now, no date has been announced for the second. But in the meantime, the Snowball Area is up for anyone in the mood to toss a few snowballs.
Bixyl Shuftan
Posted by Bixyl Shuftan at 6:02 AM