A Sunweaver Christmas Miracle: Fundraisers Save Home From Foreclosure 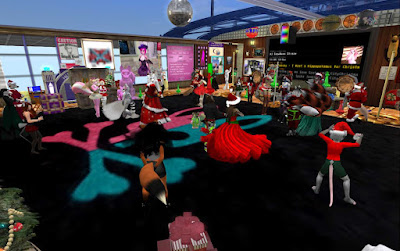 On Friday December 23, there was a fundraiser event at Club Cutlass. The usual two hour Friday night event was turned into a six-hour marathon as five DJs played music to the crowd. A few days before, Perri Prinz had come forward saying she and her partner Recoyote Mindes were facing a real-life eviction due to their landlord both raising the rate and moving up the date of their next payment from the middle of January just after after Rec's paycheck would come in to the first, and they had exhausted their savings.
Tonight we are having the Battle of the DJ's benefit for Reco and Perri, if you can't make it here, please drop what you can here!  https://paypal.me/RECoyote

The final idea was for a "Battle of the DJs" going from 4 PM SL time to 10 PM, with six tip jars placed just in front of the DJ booth, and the dance poles beside it. Five were for the DJs, the six for Perri Prinz where people could donate to her any time. To avoid taking a cut when buying Linden dollars, there was also the option to donate directly to Rec via Paypal. The five DJs taking part were Alexandra Tymets, Mattie Carlton,  Snowy HunniBunni Lefavre (Skylark Lefavre), Cynthia Farshore, and Perri Prinz herself.
There were a few issues, miscommunications, and snags along the way, which was no surprise as there were just a few days to get everything ready. Paypal itself was also an issue as they had supposedly enacted a rule in which they could heavily fine users for posting "misinformation" online, and hours later revoked it. But with the home of a neighbor at stake, the event went through.

DJ Lexi started things off at 4 PM SL time. Next at 5 PM was DJ Mattie. At 6PM was DJ Snowy, playing at her usual time slot. at 8 PM was DJ Cynthia. And DJ Perri closed things off at 9 PM. The themes for each set were Christmas, or some variation of it such as "Country Christmas" or "Rockin' Christmas." Club owner Rita Maniner would put prizes of 1000L on each of the two boards for each set, one session getting 2000L. But winners would usually donate all or part of their winnings to Perri's jar, as well as the DJs donating what they were tipped.

By 10 PM, a little over 76,000 Lindens had been raised at the Cutlass fundraiser. This was a little more than $300 USD before the Lab would take a cut. By itself, this was less than half of the $860 USD needed. But people also sent in money through Paypal, including one who wished to remain anonymous who told me he sent $500, which Perri confirmed. "Yes we did," Perri answered when asked if enough had been raised, "My poor math skills put the total at $1,435.77." This was much more than what was needed. Perri told me she would likely use the extra money to help with future medical expenses.

Once again the Sunweavers came through, and demonstrated the good that virtual worlds can accomplish.
Addition: Perri won the "Battle of the DJs," followed by Mattie, then Snowy.
Bixyl Shuftan
Posted by Bixyl Shuftan at 9:31 AM