The (Official) SL19B Events Wind Down 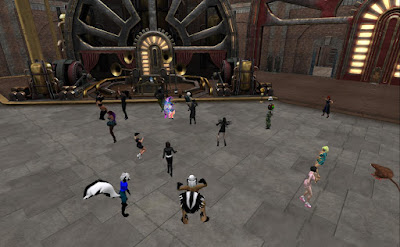 Since Thursday June 16, the Second Life Nineteenth Birthday grounds have been the scene of many events from the Music Fest, to Meet the Lindens (and Moles), to various DJ parties. Last weekend, Saturday June 25 and Sunday June 26 were the last official days of events. 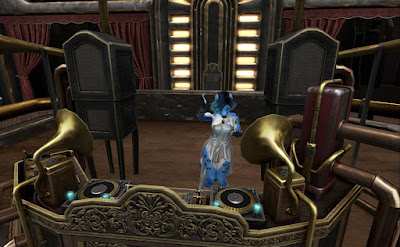 Among those whooping it up were those at DJ Tantari's set at 9AM on Saturday, "Oh won't you give me all of your Desire! I wanna take you higher. Let me take you HIGHER! .... They call me Miss MixVix for a reason. (grin)" But the official events were not the only ones. I found a gathering at the Bellisseria Bureau or Bureaucracy exhibit. 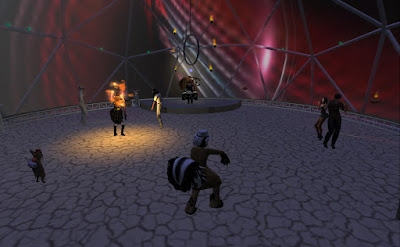 And in the Burners exhibit had an impromptu party. 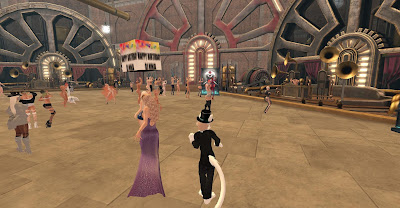 On the night of Sunday June 26, I had to be somewhere. So I sent an alt over when it was an hour before Midnight.

DJ Ninja had the honor of being the final official performer. Out on the dance floor, stage manager Vee was mixing it up with Grumpy Mole and Dion Mole.

As the hour went on, people talked about how much they enjoyed the Birthday, "I love Contraption, best steampunk stuff. We are all dancing and partying in Walton's creation right now." "I so gonna miss SL19B *cries*" "Just wait, SL20B is coming!" "Lets start SL20B tomorrow... one year paaaaaarty (big grin)" "Yesss looking forward to next year (smile)" "I don't think they ready for this to be over." "Haha! We are never ready for this to end!" "Second Life Birthday, the party doesn't end, it's just recharging for later." 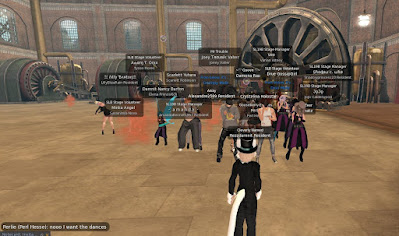 Eventually came the last tune. And then it was done, the usual radio stream taking over.

AT THIS TIME ALL STAGES ARE CLOSED!

Thank you to all the performers for the hours and talent given to the event and a BIG thank you to everyone who attended!  All of us coming together to have a great time is what Second Life is all about!

We can't wait to see you in 51 weeks when we do it all over again, even bigger for SL20B!

And so, people gave their goodbyes, "Ninja, perfect end to the party!" "Pleasure as always." "Thank you everyone it was amazing to perform and work here hugs thank you so much!!!!" "Thanks everyone  for everything you've done...Have a great night and day.." "Thank you Moles, Greeters, Volunteers and all I forgot for this AMAZING SL19B!!!!" "Thank you all looking forward to seeing everyone next year." "I had so much fun, Happy SLB!  YAY!!!" "Thank you staff, crew, moles, and everyone who made this place for us (smile)." "Hope to join the crew again next year!" "Good night guys! Thank you for everything!" "Take care everyone! To all the staff and moles, see you on the party!" "Thank you all for this awesome time (smile)."Dion Mole himself would say, "A big thank you to the Stage Crew, volunteers and all the performers!"

But this isn't the end of the Second Life Birthday. The sims will still be up until Tuesday July 5, so people can check out the numerous exhibits and get the gifts. The SL19B "Shop and Hop" is still going on. Plus there are still the impromptu parties that spring up, such as those in the last few hours before the sims are scheduled to close.

Posted by Bixyl Shuftan at 3:02 PM