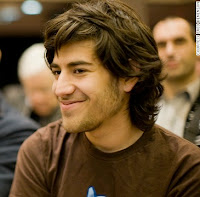 In recent days, two men have made news about what they did on the Internet. One was a football player whom was apparently duped into falling for a made-up girl. The other was Aaron Swartz, programmer and Internet activist.

Swartz is described as having been "immersed" in computers and the Internet from a very young age, programing, and later founding the software company Infogami, which later merged with the social website Reddit. CNN described him as helping to develop RSS coding "which allows websites to send updates to subscribers." "Swartz made some of today's more expansive Internet possible."

But Swartz was better known for contributing and helping to shape the philosophy and culture of the Internet, that information should be free and easily available, "He was a technologist who was committed to open access to information, and committed to bringing about the changes he believed in." At his own expense, he downloaded and made available to the public a fifth of the US Federal court PACER database. Then he founded "Demand Progress," an Internet activist organization. He also helped in the fights against the Internet censorship bills SOPA and PIPA.

Unfortunetly, he was in trouble at this time. Federal prosecutors accused him of using an MIT computer to download over 4 million articles from a library of academic journals. The university refused to press charges, and "urged" the government to let him go. Instead, Swartz was accused of wire fraud, computer fraud, hacking, and other charged that could have resulted in a prison sentence of 35 years. He was indicted in July 2011. With depression possibly a factor, Swartz hanged himself on January 11th. Both family and fellow Internet activists were quick to blame the Federal prosecutors who had went after him, who continue to defend their actions.

*Update* CNN reports that the "Anonymous" hacker group has threatened the US Department of Justice, saying they may release sensitive files, expressing anger over Swartz's death.