On Monday January 31st, residents across Second Life rang out 2012 with parties and other events around the Grid. Large and small, residents found a number of places, and a few different ways. 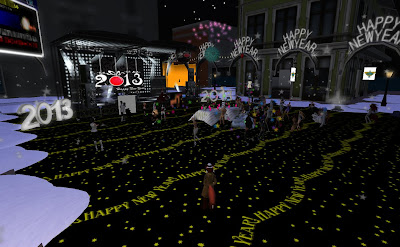 For about eight hours, Tribute City held a New Year's Eve party from about 10AM to 6PM SL time. Four DJs, playing for two hours apiece, performed. And 1500 Lindens was given out every two hours for those judged Best in Theme. While there, one could pick up party favors, such as hats and horns, or get a glass of bubbly. For Europeans, this was one place to ring out a little early, but there was no shortage of Americans there to help celebrate a little early. 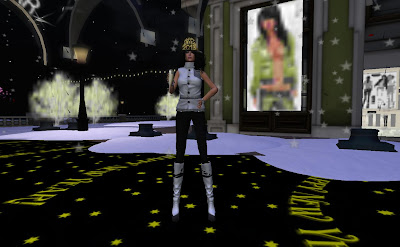 Jessii2009 Warrhol, the co-owner of Tribute city, celebrated along with the other partiers at the crowded club in WW2 Tribute. She's also known as one of the leaders of the Flying Tigers air combat group. 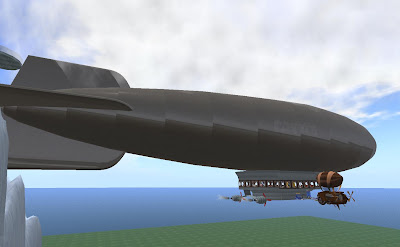 At 6PM SL time, Club Little Dove started it's own New Year's Eve Bash. Among the FCA Clubs, this was the one of which the event fell on it's operation hours. The zeppelin floats over the Colorado sim. 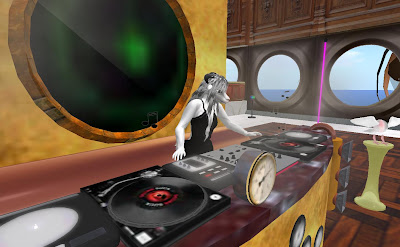 Cynthia Farshore was the DJ for the event. The self-proclaimed "Goat you got" did a six hour track of songs, some modern pop, some classic rock, and of course "Aud Lan Sang." 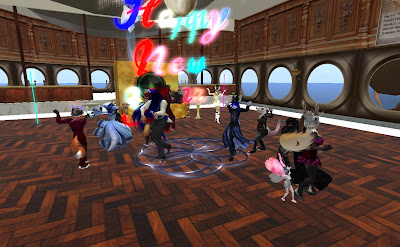 About a dozen and a half people were at the party at one time. A number of people had to leave early and a number arrived late. A total of a few dozen attended, as one by one, the New Year was rung in across the time zones. There was a prize of 2000 Lindens for the Best in Theme. Perri Prinz, writer and popular DJ, won. 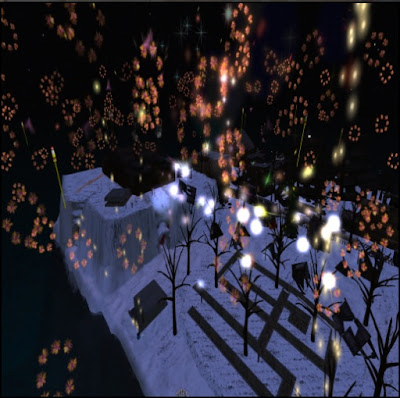 It wasn't just clubs celebrating New Years. In this reader submitted picture, the Stalingrad combat sim launches fireworks in the air at the stroke of midnight, taking a break from the fighting.

Numerous other places celebrated New Year's Eve, from Mystery, to Club Gearz at Steelhead, to Madpea, to Luskwood, to the Odd Ball, and more. And the celebration's not over yet.

New Year's Day offers more fun and merryment. Club Zero Gravity has it's "Happy Rockin' New Year"party from 6 to 8PM, with DJ Perri playing classic rock hits in tribute to Dick Clark whom hosted "New Year's Rockin' Eve" until his passing on in 2012, with 500L on the board for Best in Theme. The event is at Purrfection Estates (229, 11, 3365)

And the party continues from 8 to 10 PM, or longer, at Castaway Cove with "Skylark's Rockin' New Year's Day" beach bash. Partiers are asked to wear Father Time or Baby New Year outfits, or one of the mild to wild outfits one might wear on the streets of Time Square. The party is at Kalmeere Paradise (18, 184, 21)