A Look at the Cloud 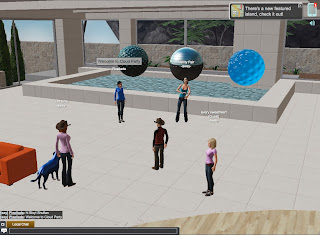 There's been a little talk about a relatively new virtual world called "Cloud Party." It appeared this summer, though required a Facebook account to connect to. Recently, the Facebook requirement was dropped, so those who want nothing to do with the popular but not always trusted social webservice can now log on with just a password and email account.

Singing up for an account and logging in, there were a few options in customizing one's avatar. There was also the option of moving either via control keys or clicking on a spot on the ground to get there. The land is not divided into sims, but is made up of floating islands. Among them, there's one named "IBM," which was used as a kind of sandbox for various items, including the cannons in the second pictures. 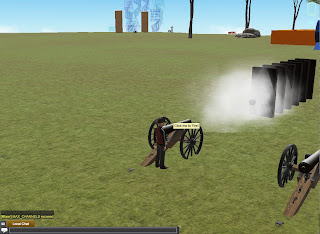 Free houses are available for those currently signing up for accounts. The one I got was on an island resembling a suburban area. Exploring around a little there were some examples of creativity, though those whom suggest it could give Second Life a serious run for it's money are mistaken in my opinion, at least for the near future. While Cloud Party holds promise, for now it doesn't look like it will be real competition for Linden Lab for a while.