From January 6th to January 12th Emphatic Eccentricia hosts a festival to celebrate its 3rd anniversary and the new sim. Preparations are underway. 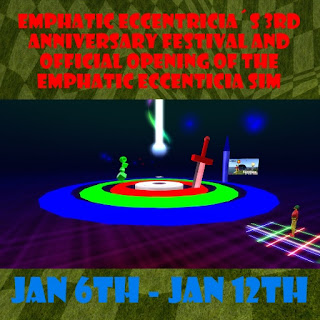 Furthermore there will be some builds by residents who are still very new to secondlife. They cannot be missed, as they are part of our reason to be.

Also one of the events of the Jodorowski tarot by MinDBlinD Setsuko is planned to take place during the festival.

We plan to do a press day on Jan 5th, which really is a bit silly as we never close...But we might be able to give more attention then :-)

There also is an open enrollment group in Secondlife: https://my.secondlife.com/groups/025d74aa-43e6-455f-4caf-a3f0faead382  (which admittedly we have not used a great deal, but we aim to make this a more let-people-know-what-we-do sort of group...

And of course we aim at being a drama free zone, which means you give people room to be them selves.

Veleda Lorakeet
Posted by Bixyl Shuftan at 6:00 AM