On Monday January 21 at 5:30 PM SL time, there was a reading of speeches by Martin Luther King Jr. at the UUtopia Peace Center in the UUtopia sim.  Caledonia Skytower spoke the selections to an audience at the center. 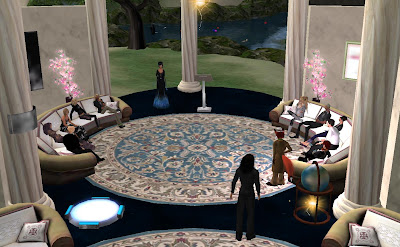 Caledonia first read King's speech given at Oslo in Dec 1964 when accepting the Nobel Peace Prize. Next was his "Where Do We Go From Here" speech from August 1967.

Following the speech readings, Fredia Frostbite lead those who didn't leave into a meditation session.

King was a Civil Rights activist in the 1950s and 1960s, known for his campaigns of nonviolence and civil disobedience. He was assassinated in 1968. In 1983, President Ronald Reagan signed into law a bill making January 21 Martin Luther King Jr. Day a national holiday in the United States. A few states were slow to enact it, or in the case of Virginia combining the holiday with another honoring two Civil War generals as "Lee-Jackson-King Day."