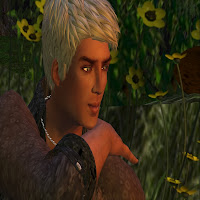 Bain Finch, one of the more active members of the Relay for Life, has been alerting his peers to the problems one of their own has been facing recently. Aryon Dagger has fallen ill to cancer a second time, and on Monday Jan 7 will be heading to the hospital for surgery, "followed by up to two weeks to recover in hospital, and several weeks at home." Another problem, Aryon's computer recently broke down, and with that her contact with her support group online as she has no funds to replace it. So Bain's been asking others to donate to get her a new one, a notecard he's been passing around saying, "My goal is to raise enough funds for Aryon, to buy this computer, with enough extra, for her to cover the extra expenses she will occur during this recovery stage."

"Now you should have several red flags waving, because of the un-written rule of RFL, we do not place one individual above our efforts in Relay. But I CANNOT sit idle by and lose one of the strongest advocates for Relay For Life and quite frankly, I need Aryon back and I will do everything in my powers to bring an honored friend back from the brink, back into the light of day, from her long night."

Bain and several others have organized an event today in the Lemonia sim, on a location over 4000 meters in the sky. The following DJs will be performing: