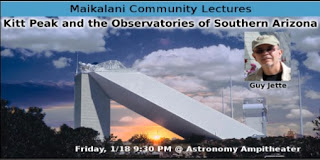 The evening’s speaker, Guy Jette, will discuss the major observatories/telescopes in operation at this site, including the McMath Solar Telescope, which has been the largest solar telescope for fifty years. This distinction will soon pass to the Advanced Technology Solar Telescope now under construction on Haleakalā. The relationships between other telescopes in southern Arizona and those on both Haleakalā and Mauna Kea will be highlighted. The talk will include key research, from Kitt Peak’s major role in identifying the existence of dark matter to a new $100 million dollar project called Big BOSS (Baryonic Oscillation Spectroscopic Survey), a project with ties to Haleakalā's Pan-STARRS.