One question some people in real life often ask me about Second Life is how one can make money. It seems Second Life Bryn Oh has found one way. She has sold almost thirty statues for over six thousand dollars. 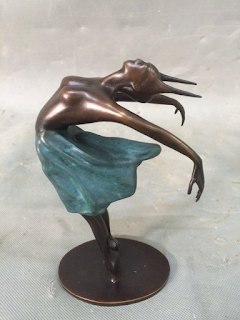 In April, Bryn Oh announced in her blog that she would be making bronze statuettes based on "The Dancer," the name given to a figure in her work "The Hand." She stated that while she had crossed over her work from Second Life to real life before, "In the past it has been things like Museum exhibits at the Menage museum in Moscow, the Jewish museum in Berlin, with oil paintings of my avatar or characters ... I have, in the past, created studies for my characters in wire, wood and something called Hyrdrocal but after speaking to my friend Toy, I decided to make the jump into Bronze.  It is a big jump because it is quite expensive to do and you kind of just have to hope someone will want to buy them after you have invested in having them made."

The first model of The Dancer were made through 3D printing. From that, a wax model was created, then used to make the cast for the bronze statues, "We used the lost wax process to create a mold to hold the molten bronze.  Essentially you create a cast around the model then melt it so that the wax runs out leaving a cavity to pour the bronze into." A total of thirty statuettes, each about four inches tall were created. They were then priced in the order they were made. The first five were priced from $400 to $300 USD, the second set of five $275, the third set of five $250, and so on with four of the last five priced at $150. Bryn Oh announced in early June that the statues were complete. 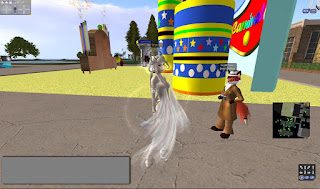 Bronze casting requires some expense, so Bryn Oh was taking a chance. But people were making orders starting in the few days after the announcement. When I met up with Bryn Oh at the Second Life Birthday, she told me a told of 21 of the thirty statues had been sold. Since then, the number has gone up to 27, for a total of $6650 USD. It seems the thirtieth statuette will not be sold after all.

Bryn Oh thought she might make more bronze statuettes in the future, "I am thinking of making a new one in six months ... not sure what to make, though. I was looking at characters I have made over the years, "Rabbicorn" to "Anna's Many Murders" to "Mr. Zippers." She also had one in Sansar she might use.

Considering most of her first release of her work on sale sold, further statues should sell well. Another example of someone in Second Life going on to make real-life money for her work.