When Sansar was finally opened about a month ago by Linden Lab, the response from Second Life's residents has been mostly negative.    So perhaps is should have been no surprise that the Lab would issue a statement of some kind reassuring it's customers of it's existing virtual world that it would be continuing to maintain and improve it as much as ever. Yesterday, August 29, Linden Lab issued a press release announcing a "set of investments into Second Life and its communities," including customer support, attracting new residents, and "enhancements to our engineering support." The Lab went on to say the amount of money budgeted for the following year in these investments is in the "millions" of US dollars, "We at Linden continue to be impressed by what we witness from Residents every day, and we want you to know that we share that commitment to and love for Second Life. "

We are hard at work upgrading all of the SL infrastructure and moving it to the cloud, which will bring a wealth of opportunities to Residents near and far, and allow us, among many other things, to make SL more performant for Residents across the world from us. It may also allow us to introduce new products with more flexible pricing.


We’re working on several features to increase the value of Premium subscriptions. Most recently we gave Premium members priority access to near-full events, and shortly, we’ll be ready to unveil another bit of exciting news for subscribers.

We're building out a series of great extensions to Windlight (code name: EEP!), which will give value, flexibility, and new marketability to land, and will make Windlight settings tradeable assets.

We have an extension to the animation system in the works (code name: Animesh) that will allow non-avatar objects to use more powerful and efficient skeletal animations the way avatars can today, and even more changes planned for creators and merchants later in the year. 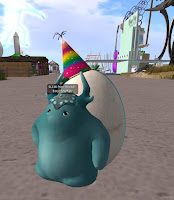 We’ve also got new experiences and events coming. An exciting new grid-wide gaming experience is coming soon! The team can’t wait to share the details with you in just a few days. Also in the works for this fall is an updated Halloween Haunted Tour, with new spooktacular events to celebrate. Not to mention, we’re turning 15 next year - SL15B, baby! That’s an incredible milestone and we are looking forward to collaborating with you to produce an amazing celebration.

It's not yet clear if this "exciting new grid-wide gaming experience" is what Patch and Dee Linden were hinting at during the SL14B or not. But it should be interesting to see

Read the press release by Linden Lab in it's entirety Here.