Tyche Shepherd's first Grid Status Report of 2019 on January 6 had some things of note, such as an increase of 11 sims that week, seven private and four Linden-owned. But these four had the letters "SSP" as part of the title,ssp65X, SSP66X, SSP67X, and SSP92X, and along with nearby SSP2 QA are apparently part of Linden Lab's
mystery SSP region, which is just to the south. With these new sims, the total is now slightly larger, now 389 sims in total size, though almost all the sims are part of the main mass which has been around since August. 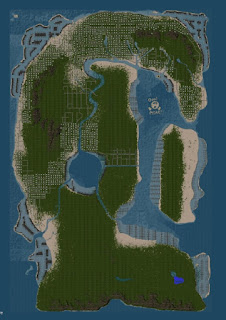 Since the Newser's last update on the area a few months ago, the amount of change has been more gradual. But some of the sims have slowly taken on more detailed looks. Many of them from above resemble streets and homes, which could be a sign the area will be a new area of Linden homes. While this has been suggested, the exact purpose for the region has never been officially confirmed.