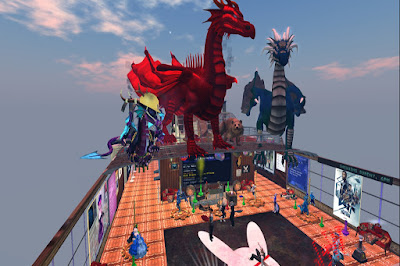 Picture submitted by Cynthia Farshore and Shockwave Yareach. On Saturday January 19, the Epic Failure Show, sometimes called the Dragon Crew, took it's act to Club Cutlass. DJ Geerkil, the purplish dragon on the left, is usually the largest avatar when he plays music. But some of his big fans showed up, and they were big in stature as well, making him look a bit small in comparison. "Wow. You don't often see so many dragons," one of the people below commented. When someone wondered if the ceiling might buckle, Shockwave, who was around, responded with a grin, "Not MY roof." He explained when he and Cynthia were building the club, he was in charge of the roof, so he assured everyone it could accommodate the draconian passengers easily.
Posted by Bixyl Shuftan at 6:02 AM