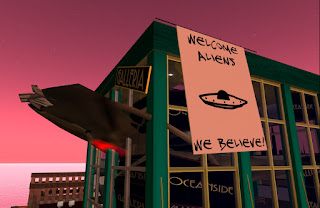 It's been a few weeks since the Newser reported on the mystery craft that had apparently crashed into the side of one of the buildings in Montecito Bay. So what's happened since then? A little.

Moff (MoffettMephit Resident) went into more detail, "So from what I've been told, it's all top secret as far as I can tell. But they don't know what it is. Current prevailing theories are, it's a giant radio controlled model that went horribly awry, or perhaps a top secret military thing. Now the believers are showing up and pushing some alien/UFO theory. You can tell by the angle it hit the building that whatever that thing is had some reasonable altitude." 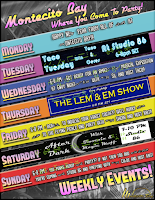 There was one other matter, the posters of their club events becoming increasingly marked by weird symbols, as well as announcements in Discord. Moff told me, "About the posters, I dunno what's going on there. We create them, they are perfect, and the moment we upload them to the places they go, they somehow get corrupted. I'm wondering about sunspots. I mean, they're uploaded, so there's a data stream involved, so yeah, I guess sunspots could interfere. We're not really finding anything else. Same with the radio streams. They're clean, but then that weird stuff happens."

Of the mystery patterns with a resemblance to crop circles that have appeared in the sim's streets, Moff replied, "The streets department tried. None of their strippers will touch that paint, or whatever it is." Talking to him later, he was saying they would only go so far in trying to remove the symbols as they didn't seem to be doing any harm, "We're still trying to figure out which solvent to use to clean 'em up. So far, none have worked. We don't want to cause an environmental crisis. "

"This has been a very bizarre year here," Moff told me, then smiled, "I can't wait til the new year!"

Later on, there was a conversation about a NASA craft in development that would stop meteors. Some wag, probably referring to the situation in the city, commented it would be useless against aliens.

What happens next? Time will tell.