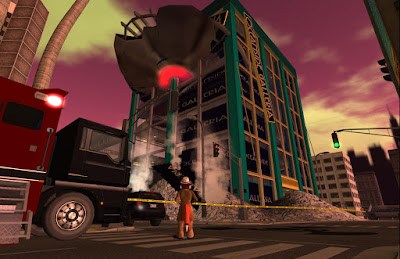 Just a week after the Newser reported on mysterious circles appearing on the streets of Montecito Bay, more strangeness has happened. Their Oceanside Galleria building has what looks like a flying saucer of some kind having crashed into the side.

If anyone needs to take Flamingo Ave. East, don't bother, traffic is officially halted from the start of Mission and ends at Venetia. We're not entirely sure, but... there's been a massive..... object that's crashed into the Galleria. We're doing our best to sort it, but please, to avoid delays, simply go all the way around to Bayside Drive or Palm Drive.

Group chatter didn't reveal much. Two people stated besides the police, the FBI has gotten involved. But no one would would say a thing about what the craft was, except perhaps the person in charge of the community's Twitter page.

Traffic has been halted from the start of Mission to Venetia, as authorities investigate a vehicle crash in the side of the Galleria. Expect delays. ⌿⍀⟒⌿⏃⍀⟒ ⊬⍜⎍⍀⌇⟒⌰⎐⟒⌇
#SecondLife #UFO #Second_Life

So somebody called this craft a "UFO." What the strange symbols in the tweet, or those in the tweet of this week's club events mean, or if they have anything to do with the UFO or the strange markings on the streets is unknown.

Although the US Military has tried to develop aircraft that resemble flying saucers, so far the prototypes are highly unstable more than a few feet in the air ... so far.