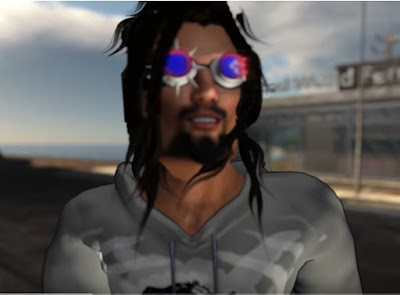 Much like the Newser's Persons of the Year, the Second Life Birthday Group Volunteers, the runner-up is known for his accomplishments in previous years as well as this one. Draxtor Despress (Bernhard Drax in real life) Originally known for his "Flufee" videos made with Pooky Amsterdam, in 2013 he started a new series of informative videos about Second Life, "The Drax Files." This was followed in 2013 with "The Drax Files Radio Hour." Last year, he did some Sansar preview videos to help promote Linden Lab's next generation world.

This year, Draxtor produced a documentary film, "Our Digital Selves: My Avatar Is Me." The movie, "tells the story of 13 global citizens and their avatars as they transcend their various disabilities through artistic expression and making a home for themselves in the VR Metaverse." The video has been viewed almost 50,000 times, and no doubt has changed some minds on what Second Life, and other virtual worlds, are all about.

So for his work past and present, Draxtor Despress make's the Newser's Runner-Up for Man of the Year of 2018.

Other noteable people included Luskwood for still being a noted community after fifteen years, the former residents of the closed InWorldz Grid, the Relay for Life volunteers, and of course the Lindens for keeping Second Life up and running for fifteen years.