Persons of the Year: The Second Life Birthday Volunteers 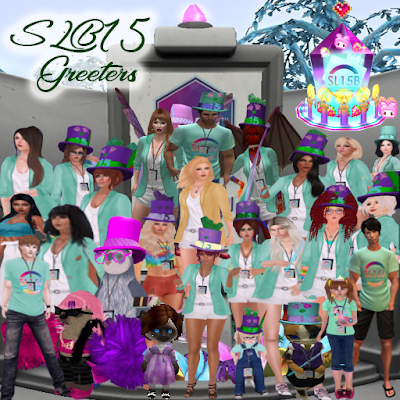 Second Life had it's share of people making the news this year, as well as people behind places and events making the news, and those making an impact behind the scenes. Finding someone who both stood out and made a difference was less than easy. But we did find someone.

Every year since it's first, there has been an anniversary celebration of some kind within Second Life, the Second Life Birthday. With one exception, the first eight were handled by Linden Lab. But in 2012, the Lab announced it would no longer be organizing one. What happened was that a number of residents took it into their own hands to organize the event, and these volunteers saved "The Birthday." Had the Newser been giving out it's "Man of the Year" award then, it would have gone to them.

This year came a milestone birthday, Second Life's fifteenth. It would me more than just the usual crowd of Second Life residents, but people coming back after taking a break for a few years as well as a few from tech blogs and magazines whom would be seeing the event as an example of the best of what Second Life has to offer, and giving their critical eye of what they saw. While Linden Lab has been taking a role in anniversary celebrations lately, such as the Musicfest and the "Meet and Greet" with noted Lindens, "The Birthday" is still up to a group of hardworking, and mostly overlooked volunteers.

Any Second Life Birthday is a challenge to undertake, the planning, the exhibit inspections, greeting and guiding visitors, watching out for griefers, finding people to fill in for musicians who can't make it, and more. And occasionally mistakes are made. But as always the Second Life Birthday volunteers rose to the challenge, and they tackled it well.

Many of the SLB volunteers have been mentioned in the Newser a number of times, such as Marianne McCann, Faust Steamer, Treacle Darlandes, and others. Our own Gemma Cleanslate was an SLB greeter for a few years. But many others have done their (unpaid) jobs practically unnoticed outside the volunteer group.

So for their hard work this year, as well as previous years, for this high-profile event, the Second Life Newser names the Second Life Birthday volunteers as it's Persons of the Year.

Stand by for our runner-up on Monday.