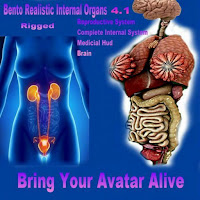 Remember the "Visible Woman" Beckye Burnstein a few years ago? For those who don't, She added realism to her avatar by adding bones and organs underneath. Since then, yours truly has seen a number of avatars with brains in the head, but nothing more until a friend pointed out a mutual friend had gotten internal organs. Talking to her, she pointed out a certain item on Marketplace: "Bento Realistic Female Organs 4.1."

What the product does install a set of organs and glands one would expect to see for a grown woman, a heart, lungs, intestines, a liver, and more. This includes mammary glands and ovaries and an uterus. There's an option for the brain to give out "emotional messages," which appear in local chat, "What your heart thinks is great, is great. The soul's emphasis is always right." There wasn't really a way to see the organs other than panning inside (I let the lady know, as well as getting the okay to take and publish pictures). 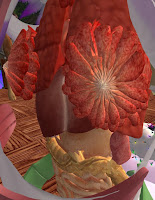 The item, made by a Jackhammerhp Strom, is up for sale both on Marketplace and his inworld store. Most of the reviews in Marketplace were positive, "So realistic in a creepy but awesome way." But one gave mixed reviews, "This product isn't good or bad, it's just...confusing? " Jackhammer recommended an avatar of at least 20% body fat, plus altering the avatar further if some organs end up poking out. One reviewer stated it doesn't always work on furry avatars, though it was a furry I saw with the organs.

There are a number of other items in his Marketplace store, and inworld, including Bento skeletons for avatars, and a skeleton and organ "Pregnancy System." It should be noted some of the items are clearly of an adult nature, so the page should be considered "Not Safe For Work."

So has Beckye heard of the Bento organs? Messaging her, she responded, "Of course I did, and I got it right away! Haha, finally someone made it!"

So while selling human organs in real life may get you in a lot of trouble, in Second Life, it can be done. That is, if you've got the "guts" for it, and the "heart" to always listen to your customers.