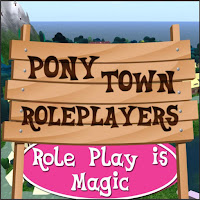 Besides being a noted member of the Sunweaver community, Dusk Griswold (Ginger) is also one of the staff of the Pony Town sim. She stated the sim has been "temporarily closed for a move and remodel" for a month, and isn't sure when it will be open, "I haven't gotten a definite answer. ... There was no notice sent out, just a public announcement in sim on Halloween." The sim closed a few days later.

Dusk stated the sim has been around since 2010 or 2011, "one of the longest running MLP sims." Of how the remodeling is going, "I have been to it to see the progress, it is coming along nicely. ... Some features the old sim lacked will be added. I can't go itno detail, though."

On the map, Pony Town is close to Saddlewood, another pony sim.