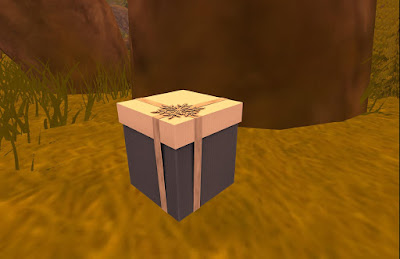 It's the third week of Linden Lab's "Winter Swaginator Hunt." And there's a new gift out for it. The clue posted on the Linden blog goes as follows:

Among sparkling crystals and dangerous rocks, the treasure is hidden inside a magical box! In this Realm, look high, look low. It's hidden nearby a tree that glows.

This was followed by a more direct comment, "Head to Linden Realms in Portal Park!" - https://maps.secondlife.com/secondlife/Portal Park 1/128/128/23

So where in Linden Realms is it? We'll have the location this weekend. But take note Linden Reals has a new obstacle: "air blobs." They appear out of nowhere and knock your character out. So be prepared for a lot of setbacks.

Addition: When I checked later in the evening, the air blobs were gone. There were fewer people in the Realms at the time, so maybe this particular obstacle appears when there's more than a certain number of residents at the time. So maybe check for the present when there aren't so many others around.