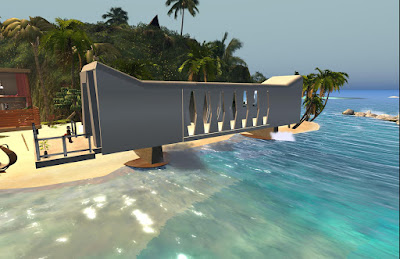 It was 77 years ago on December 7, 1941 in which the Second World War came to the United States. The Japanese Empire launched a surprise attack on the US Navy base at Pearl Harbor Hawaii. Over 2400 were killed in the attack, including almost 1200 of the 1500 sailors on the USS Arizona, when the battleship suffered a catastrophic explosion. Most of the ships severely damaged or sunk were repaired and returned to service. But the Arizona was too badly damaged to raise. It would be left in the water, the resting place for most of those who died on the ship. In 1962, a memorial was build over the battleship, the USS Arizona Memorial.

In Second Life, a replica of the USS Arizona Memorial stands at the Oahu sim. The memorial has existed for several years, and had a 70th anniversary commemoration in 2011.The memorial was offline for several months in 2016 when the sim closed. But in January 2017, the sim and memorial came back online. Last year at this time, the memorial was inaccessible due to the sim being "under construction."