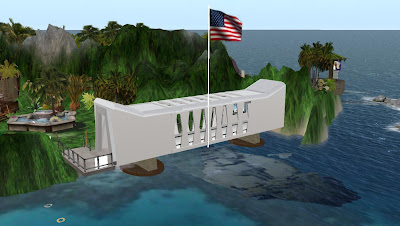 Sometime between December 2015 and Memorial Day in May 2016, the Oahu sim disappeared from the grid, taking away it's most unique build, Second Life's USS Arizona Memorial with it. But good news, the Newser was recently informed by the sim owner Twstd Ruggles that the island was back, and with it the memorial, which one can visit again at Oahu (176/22/23).

The memorial had previously been up for several years, and hosted a Peark Harbor 70th anniversary event on December 7 2011. It's return is welcome news for history and military fans.