A couple days ago on January 4, Linden Lab released some details on Sansar. One was a video, Sansar Creation Preview, featuring Loz Hyde, noted for being the man behind Meshworks and has worked on motion pictures such as "Terminator Salvation" and "Guardians of the Galaxy" (2014 interview by Draxtor Despress).

Details about Sansar's virtual currency, the Sansar Dollar, were also made public when "Road to VR" magazine talked to "a representative of Linden Lab." The Sansar Dollar will be made available at the rate of 100 per US Dollar or one cent apiece. 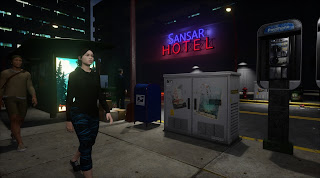 Second Life users will not be able to directly exchange Linden Dollars for Sansar Dollars, at least "for now." The Linden Dollars would have to be sold on the Lindex for real world currency (in which Linden Lab takes a cut), and then the user used the money to buy Sansar dollars. The representative did say that they "have not yet determined the rate of commission" they will be taking from Sansar users selling it's virtual currency for real world money.

On Upload VR, it was mentioned that as of December 2016, there were 700 content creators in Sansar, and Linden Lab was planning on giving more an early start before the official release. In an interview with Tom's Hardware, the number given was "roughly 500, maybe 600."

In an interview with Venturebeat, Ebbe Altberg revealed Linden Lab will be charging both transaction fees for purchases in Sansar and "hosting fees" for virtual land, “We want it to be low enough that it does not add unnecessary friction to the economy ... But we do want to get a piece of the GDP and then make the hosting fees for Sansar as low as possible. We charged quite a bit for the hosting fees in Second Life and didn’t have a consumption tax to take part of the GDP. So now we will balance the hosting fees and the consumption fees in the economy.”

At one point in the Tom's Hardware interview, Altberg commented, "we continue to add more creators .... And we will continue to do this throughout the first quarter." Later on, the interviewer asked, "So, you’re running the private creator preview for Sansar for the next quarter or so?" Altberg answered, "Yeah. We’re trying to be data driven in the process as opposed to date driven. I wouldn't say we have all kinds of luxuries and that we’re taking our sweet time, but we want to make sure that it's incredibly great by the time any user can get access."

So it seems instead of the announced release date of January 2017, this month, it looks like Sansar will not be available until at least April, possibly longer.