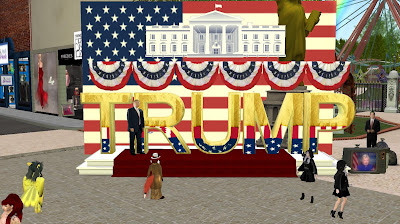 Today is Inauguration Day, when America swears in a new President. While there were people gathered in some places, such as with the Second Life Republicans, the most visible display welcoming in President Trump was at London City, where this colorful display was set up at (79/226/23). Although the election was controversial and filled with high amounts of arguing and rhetoric, the discussion seemed civil when I peeked in (it's possible the Linden nearby helped).

The Newser will have more up later.