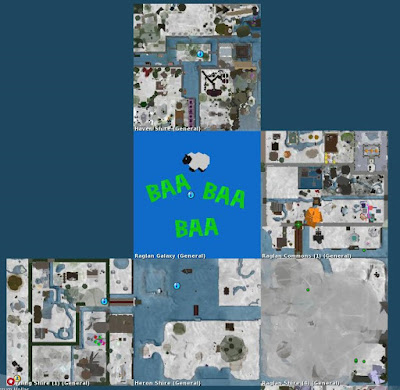 Just thought when you thought it was safe to check the Second Life map over Raglan Shire. 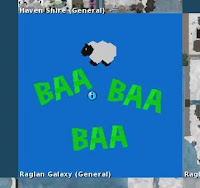 Readers may remember when in November, when someone left a "Cats Rule" message in huge letters high above the Raglan Galaxy sim in Raglan Shire. It would come down in a few days, only to be followed by similar messages of "Bear Butt" and "Merry Wootmass," by whom Linn Darkwatch, a resident of the tiny community, called the "Merry Prankster."

Well, the new year has just barely started, and the Merry Prankster is at it once again. Lynn Darkwatch on January 1 posted another map picture of the sim, and there was a picture of a sheep and sheep calls of "baa." A few other Raglanders made comments like "I see those scandalous sheep are at it again!" and "how do yew3 do dat anyways?"

Given what happened the first couple times, this should be only up for a few days. But it seems the "Merry Prankster" is still working his mischief on the noted tiny community.