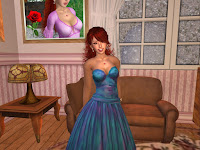 Deaflegacy recently interviewed Tindallia Soothsayer, one of the Giant Snail Racing team. For eight years, she has taken part in this longest running of Second Life's sporting events, both as a racer and as a member of the staff. Earlier this month, "Tindy" as her friends call her dropped a bombshell. She is stepping down as one of the racers, though will remain as one of the staff.

Read Deaflegacy's article in People.
Posted by Bixyl Shuftan at 6:05 AM