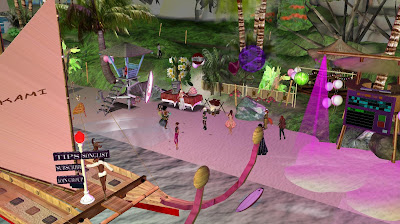 On Saturday January 7, The Oahu sim had their official grand-reopening party, the "Oahu Ohana." The party got started at 12 PM with some music, and at 1PM had a "Maori, hula, and fire" dance. 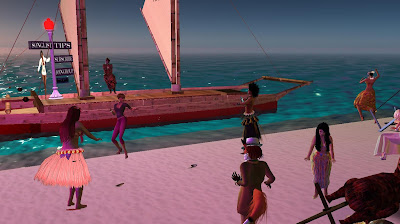 Twstd Ruggles (the lady in the grass skirt to the left) is the owner of Oahu. The sim had been up for several years, but closed sometime in early 2016 due to her real life financial situation. She informed the Newser on January 3 the sim was back and online, with the official celebration on Saturday. 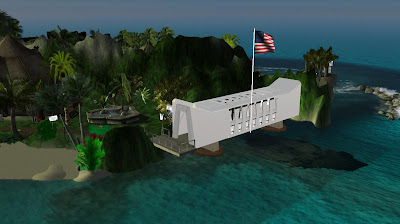 On the other side of the island from the celebration stood the island's most noted feature, the USS Arizona memorial at (176/22/23), a tribute to those killed in the Imperial Japanese attack on Pearl Harbor. People drop by the memorial, notably on Memorial Day, Veterans Day, and the Pearl Harbor anniversary on December 7. But the island also has much to offer people who just want to kick back and relax on the beach, watching the surf roll by.