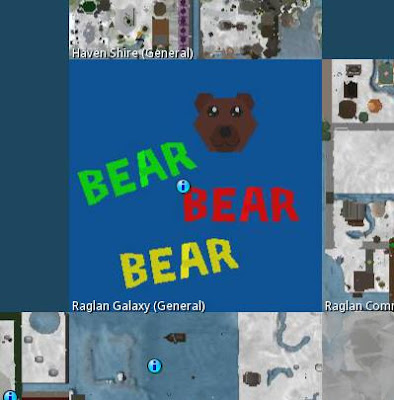 In what has become an ongoing situation since November, the Raglan Galaxy sim has been subject to a series of pranks by one or more individuals. After a "Wootmas" truce, On New Year's an overhead look at the map showed things were looking rather sheepish. But over the next few days, the "sky graffiti" would change, as Linn Darkwatch would post on Facebook a couple days ago. 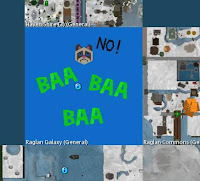 "The skies over Raglan Galaxy seem to be in a graffiti war. January 1st there was a sheep with Baa Baa Baa. By Jan. 10th it had turned into a grumpy cat face with Baa Baa Baa. This evening we have an unbearable situation."

There were a few chuckles and comments of mock outrage afterwards, "This is scandalous, something should be done, where is the Law?" Someone asked how this was being done, and Linn offered an answer, "Objects above a certain height don't show on the map - that's why the space station doesn't show on the normal view of Raglan Galaxy. The huge blue prim, words, and picture are all placed just below the space station - high enough not to be seen from the ground, low enough to show on map view. If you want to know who did it, do what I did: jump off the space station and fall a short distance, then fly when you see the blue go past you, and inspect the prims to see whose they are. There's more than one person in on this gag, but I'm not telling who!"

So what kind of tom foolery is next for Raglan Shire? It's just a matter of time before we find out.