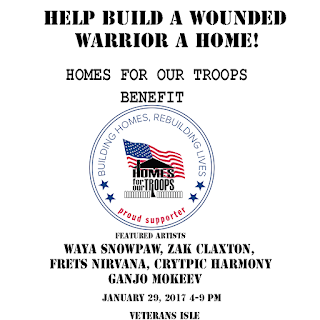 Frets Nirvana and US Military Veterans Group announce the 2017 kickoff benefit for Homes For Our Troops in Second Life!

Frets Nirvana, the premier guitar artist in the virtual world Second Life and the US Military Veterans Group announce a benefit on December 18, 2016 in Second Life for the Veterans Support Organization for Home For Our Troops .

Frets Nirvana states:  “HFOT is a privately funded 501(c) (3) nonprofit organization building specially adapted, mortgage-free homes nationwide for the most severely injured Veterans from Iraq and Afghanistan. Most of these Veterans are multiple amputees, paraplegic, quadriplegic or suffered severe traumatic brain injury (TBI).  As of January 2017 they have built 229 homes for severely wounded Veterans and have another 85 projects underway.  Since its inception in 2004, over 90 cents of every dollar spent by Homes for Our Troop has gone to directly support Veterans. ”

ABOUT HOMES FOR OUR TROOPS  - HFOT builds homes as a departure point for Veterans to rebuild their lives, and once again become highly productive members of society. Despite their life-altering injuries, many Veterans have embarked on new careers, completed their college degrees, or started families. Empowered by the freedom a mortgage-free and specially adapted home brings, these Veterans can now focus on their recovery and return to their life’s work of serving others. Many have embraced their roles as motivational speakers, sharing their messages of persevering through tragedy with groups and classrooms around the country; others take to a national platform to promote awareness of veteran suicide, homelessness and PTSD. Their incredible stories are the driving force for the work for HFOT. To learn more about the Homes For Our Troops visit https://www.hfotusa.org.
Posted by Bixyl Shuftan at 6:01 AM