One of the problems residents have, especially those new to Second Life, is about finding interesting places to go to. There is the "Search" function while inworld, but while better than nothing it doesn't always find what you want. Then there's the Destination Guide on the Linden website, though it offers just a short description. In the Linden Blog on Wednesday, the Lab announced they have been working on a few feature that is now available in a beta viewer: "Place Pages." 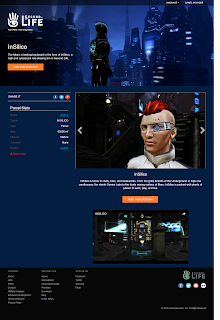 Place Pages are a new feature aimed at making the huge variety of awesome places in Second Life easier to find by creating web pages for each inworld location that opts to show in search.

Today, we’re starting a beta for this feature. All regions and parcels that have elected to Show In Search now have an automatically generated Place Page that’s visible on the web, you can check them out and share them today! Places rated General will be visible to anyone, and those rated Mature or Adult will be subject to the usual Maturity controls.


Several of these Place Pages are already up. On the entry in the Knowledge Base (and Daniel Voyager's Blog), were links to the following: Innsmouth, Fogs End, Crestwick Island, and Inslico (which was rescued from closing several days ago). In the forums, a fifth place was mentioned, the Linden-run Winter Wonderland.

Inara Pey called the announcement, "frankly – vague. Whilst explaining the purpose of Places, and the fact it is beta, the blog post itself doesn’t actually provide information on where to find detailed information on the new pages – such as how to get started or even how to view the new pages." Hamlet Au stated that he had been told six years ago this feature was in development, but obviously work on it had never gotten far until now. He went on to say the feature had much to be improved, notably one problem that made it next to useless for anyone not a user of Second Life. 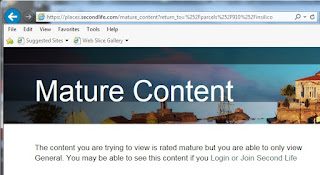 "The first problem is right in the announcement itself: 'Places rated General will be visible to anyone, and those rated Mature or Adult will be subject to the usual Maturity controls.' Trouble is, most great Second Life locations are rated Mature or Adult. So in other words, hardly anyone including and especially non-users will be able to even see these web pages.
Seriously. Imagine you're a fan of HP Lovecraft who wants to show another Lovecraft fan the Page of Innsmouth, a great Second Life sim devoted to the horror author's work. If they're not already a user, (they get a page just marked "Mature Content"). 99% of non-users will give up at this point. On Linden Lab's scale, 'Mature' is equivalent to an R rating from the MPAA, but they're currently treating M places like porn. So hopefully Linden's web devs realize what a fail this is."

Other suggestions by Hamlet include, "a button for sharing pages on Plurk" and "an option to embed pages on blogs and other websites."

On the official forums, there was a general feeling of approval, "Love, love, love this idea!! Thank you SL!" "Something like this has been needed for quite a while." Though some felt it still needed much improvement, "We really need a way to let outsiders see these pages though, without them needing an account first.Use these pages to lure non-sl people in. Perhaps a little disclaimer about possible maturity issues or something, but these pages should be viewable for everyone." Loki Eliot felt this feature had a great deal of potential, but at the moment the description had "less space than on the destination guide. What was the thought behind limiting to 250 characters?"

Troy Linden on the forums admitted that most pages not viewable to non-users of Second Life was a problem, "We're working on a better solution to gate content based on the visitors and hope to have a better solution soon." So it seems there should be changes in this feature in the near future.