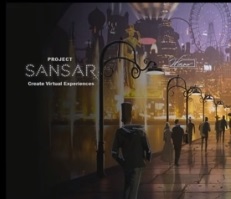 If the Newser's predecessor paper, the Second Life Newspaper, and the self-described tabloid of several years ago, the Alphavile Herald, were "arch-rivals," then the relationship between the Second Life Newser and that of Hamlet Au's "New World Notes" can be described as something of a friendly rivalry. We've occasionally poked fun at Hamlet, such as when he got stuck in a Japanese schoolgirl avatar and couldn't get out. But in the end, he's respected as a journalist with a good record.

Still, his comments on Friday, shortly after he'd given his newsletter's appearance it's first big change in years, left me with a chuckle. Of the recent article on Sansar in Upload VR magazine in which Ebbe Altberg/Ebbe Linden was interviewed, near the end the article talked about how they were trying to make Sansar more user-friendly than Second Life, which even it's core users acknowledge has something of a high learning curve, "Enabling people ... to create amazing content, while still keeping the interface intuitive and user-friendly for the average consumer. That’s something that Second Life never quite achieved, but in building Sansar, Linden Lab is determined to draw lessons from its predecessor."

“We learned some positives but also a lot of ‘that’s not how you do it’ from Second Life,” said Altberg. “So we’re having a much more user-centric approach from the beginning, and try to make sure we stay away from the territory of complete geekdom.”

So as a joke, Hamlet suggested tongue-in-cheek, "This should actually be Sansar's unofficial slogan: 'Avoids Second Life's Complete Geekdom.' "

Hamlet was trying to be funny (Hamlet being a ham?), and some of those responding also made crack comments. A few weren't laughing, "the best proof yet they have no clue who their customer (base) is!" Me, I simply responded in kind, "Staying away from geekdom? So instead of Star Trek and anime fans, it'll have rednecks drinking beer and waving Confederate flags?"

What Ebbe was trying to say was that Linden Lab was trying to make Sansar easier to use, though as Hamlet pointed out, he could have done a better job of doing so. If Second Life was ever in "complete geekdom," it left those days long ago and became filled with people such as war veterans, housewives, farmers, and others whom don't exactly have a reputation for being part of "geekdom." Of course, some farmers can be a *lot* smarter and tech-savy than "city slickers" give them credit for.

Still, if Hamlet Au and Ebbe Linden wish for Sansar to be less "complete geekdom" than Second Life, perhaps they should invite content creators to start making Confederate Navy Jack banners and cans of Budweiser with drinking animations.