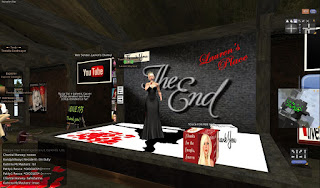 On Tuesday January 17 at 5PM SL time at the Cookie sim, comedian Lauren Weyland held the last of her weekly stand-up comedy shows in Second Life. For ten years, she/he had been doing the performances with only a handful of weeks missed. And now, it was time for the final one, and the close of an era in Second Life comedy.

As she always had whenever I've seen her, Lauren drew a large crowd, some with signs saying "Thanks for the laughs, Lauren." The show was different from others as Lauren looked back at his/her ten year virtual career, which included a few real ones at Second Life Community Conventions. 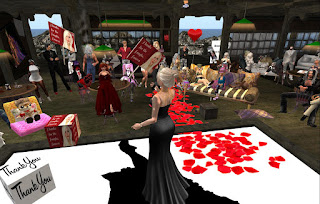 The show would poke fun at Second Life, such as the tale of the virtual hooker whom continued to do business with her best client even when it was revealed like Lauren "she" was a male in real life, "but we'll keep it on text." The comedy would also poke fun at real life newsmakers, such as Donald Trump whom assumes the US Presidency later this week and Chelsea Manning, a transsexual serving time in prison for leaking secrets to Wikileaks whose sentence had been shortened by President Obama that day.

The crowd included a few noted personalities, such as filmmaker Chantal Harvey, DrFran Babcock and Any1 Gynoid whom wrote for the Newser in the past, and Catboy Qunhua who volunteers for the Second Life Birthday, as well as doing one of the supporting acts of the stand-up show. 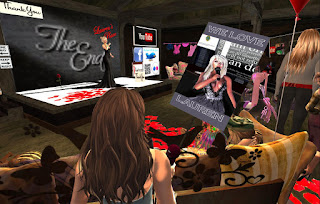 The show will continue on, relying on those whom had been Laurens supporting acts such as Doc Grun and Jamie Jordon. But the noted blonde with the falseto voice will be absent.

"All of you, to my last breath, will be my friends." Lauren says while this is the end of her weekly show, this is not the end of her comedy in Second Life. She says she'll pop up "time to time."