The Wild West Roleplay: Part One - Getting Started 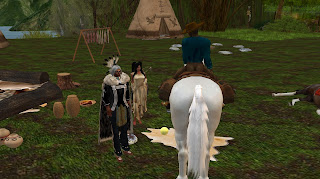 There's just something about the Old West that has a deep appeal to people, and not just to Americans. Here, a man could make a new start for himself, whether someone from a large family wanting his own farm, an immigrant wanting more than a factory job but his own home, former slaves and freedmen looking for new opportunities not available in their old home, prospectors looking to strike it rich, businessmen looking to make a buck, adventurers looking to make a name for themselves, lawmen trying to bring order and justice to the frontier, and more. But where there are people, there are always opportunists whom would rather rob or con others than work at making their money honestly, and so there were the outlaws or badmen. And the land wasn't empty. The place was the home of American Indian tribes, either whom had been here since the dawn of history or perhaps having moved here after being forced from the east. How to adapt to the changing times, and yet still preserve their traditions and culture? 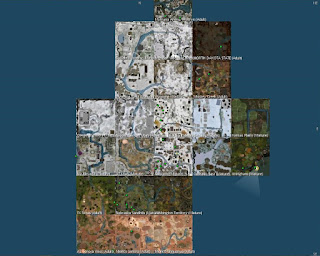 Becky Shamen had originally wrote in 2016 about the twenty-three sim Wild-West themed roleplay area she simply called "The Wild West Roleplay Lands." I was recently approached by Goneigh, or "Gone" as his friends call him, who usually goes about in a feral horse avatar. He owns one of the sims of the place, Tittingham, or "Indiana Wilds." He told me he was just one of a number of sim owners there, some owning one, some two or three, whom had banded their locations together so their roleplayers had a huge place to roam around in, from the flat prairies of Oklahoma to the dry desert of western Texas and northern Mexico, to the Rockies. "One sim is nothing," Goneigh told me, "but 23 sims offers much adventure. We have green places, snowy places, and red-dirt places." The entire area combined had no official name, though "Wild West Roleplay" would do for now. 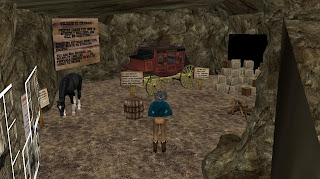 While you can find the RP HUD in most sims, it is recommended that new players start at the store area above the Colorado sim at (190/105/944). follow the gold arrows to a cavern. There you will find a few recommended items for purchase, and a few freebie outfits and weapons. Click the stagecoach, select "to join" and then teleport and go down a tunnel, which leads to a board where you can get the RP HUD, an observer tag, and a copy of the rules. Goneigh felt two rules deserved special notation. One was that this was a plot driven roleplay and not just a "shoot-em-up." Anyone whom just went around shooting people would be treated as a threat by everyone. Goneigh did say there were a few examples of attacks by such people that were later talked about "in character" as attacks by unknown lone badmen. Another rule was one that fans of nonhuman avatars would likely dislike. Like a number of other historical RPs, there's a rule about having to look like someone from the time and place, both in appearance and dress. So one is limited to human avatars, wearing styles of clothing that could be seen in the Old West, or feral animal avatars of domestic and North American animals, such as horses. So while furry avatars aren't within the rules, neither are obviously out of the time period styles of clothing such as punk rock outfits and hairstyles. 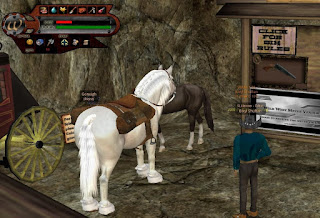 The HUD is in a box that has to be set down and opened, but fortunately you can do that in the entry area. It has a number of symbols on the top row, a red bar and a green bar in the middle, and more symbols on the bottom row. The red bar is the health meter, and starts out low when first activated, but soon builds up. When hit by bullets, weapons, or animal attacks, it goes down. When it reaches zero as the result of a fight, the player is considered "defeated," and must wait to recover, or be healed. The top buttons are for, food (such as apples and tomatoes), fluids (such as water), plants (such as herbs), tools, objects, components, and medicine. Two smaller bars under those are for hunger and thirst (okay at the start). On the bottom row, the first button brings up the players coins. The second button takes the player in and out of OOC mode. The third button is for putting the player in a melee position. The fifth button can also put the player in melee mode and toggles male/female sounds. The sixth button brings up webpages explaining some things about the game: meter usage, inventory usage, inventory description, and RP Object description. On the very bottom is a button showing how many coins the player has on hand. Over the player will be displayed the player's health and condition, red when low, orange when medium, and green when good.

In the part of the beginner's area where you get the HUD, you will find a list of some of the administrators. If you have some questions, feel free to answer some questions. 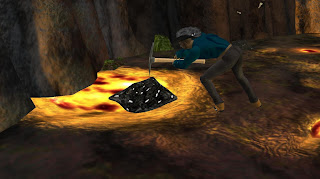 So how can one make money in the RP? At Tittingham, there is a mine in the north, center part of the sim. One can reach it, by going along the river next to the mountain, waliing into what at first looks like just a dent in the mountain wall, but turns out to be a hidden cave. There are spots where one can mine coal, iron, tin, copper, silver, and gold. To mine, get the pickaxe in the hand of one skeleton on the ground and wear it. Then sit on the spot you want to mine. Coal doesn't take long to mine, just 15 seconds to break off a chunk. But each metal takes longer, iron 30 seconds, tin 45, copper 60, silver 90, and gold 120. When ore is mined, it's recorded in your HUD.

There is a furnace nearby where you can smelt ores into bars, and forge the bars into items, such as blades and axeheads, and can also be used to make "blanks," which are used to help make certain other items. Items you make in the furnace are also counted in your HUD. There's also a couple tomatoes that spawn here, as well as some plants and a couple peices of wood. 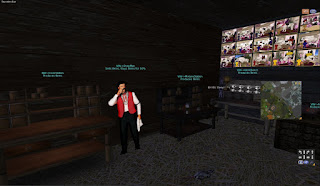 Along the road in the western part of Tittingham, there are a couple shops. The one slightly further away from the road has some NPC merchants and workstations. NPC characters here will buy and sell certain items at a 50/100 percent cash value. For instance, the blacksmith will buy bronze bars you make from the cave furnace for 23 coins. But it takes 46 to buy one off of him. The merchant will buy your gold bars here for 43 coins. So you could make a little cash here as a miner. But you can also use the bars at the mine to forge items like blades and axeheads at a furnace, and use the workstation to make those items into knives and axes. You'll need wood, which besides in the mine spawns in a spot just outside the store. Five wood pieces can be combined into a log, of which you'll need one apiece to make items like knives, axes, and shovels, along with a "blank" which needs one bronze bar and a coal to make 10. Both items will raise your melee strength in a fight. 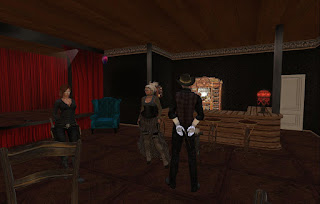 Should you meet anyone, remember that you're expected to act and behave like someone in the Old West. Any Out of Character chat is recommended to be in parentheses, or otherwise obvious that it is. These people may include cowboys, lawmen, American Indians, or possibly bandits. The latter may leave new players alone out of courtesy, though there's always the chance encountering them may lead to the player being demanded "Stand and deliver."

So there are a few details about getting started. Later on, we'll discuss more about some of the groups of people, and more. For now