Members of Linden Department of Public Works to be celebrated 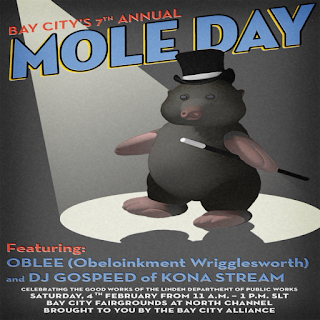 BAY CITY, SL (22nd January, 2017) -  Bay City will once again come together to celebrate the hardy Moles of the Linden Department of Public Works on the 4th of February. The event will be held in the Bay City Fairgrounds in North Channel. As in past years, the invitation is open to all Second Life® members to join in the fun.

This will be the 7th such event, set aside to show appreciation for The Moles and their many contributions to Bay City and the rest of the Second Life™ Grid.

Normally held on the same day as Groundhog Day, this year's event will be observed two days later, taking advantage of the weekend. The event will feature a performance by DJ GoSpeed of KONA Stream at 11:00 a.m., followed by a live performance by Oblee (Obleoinkment Wrigglesworth) beginning at noon.

"Moles" are members of The Linden Department of Public Works (LDPW). The LDPW is a program focused on improvements related to the experience of living on, or visiting the Linden Mainland. The LDPW is a team of Resident builders, scriptwriters, and others to create new content on Linden Lab's behalf and to the benefit of all. These Residents all have Second Life accounts with the last name “Mole.”