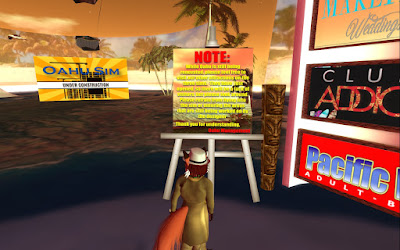 Going to the USS Arizona Memorial at the Oahu sim turned out to be a no-go yesterday as the sim was closed to the public. The reason, it was "Under Construction." Having an alt join the group, the place should be reopened on December 9 to a "Grand Opening" party. 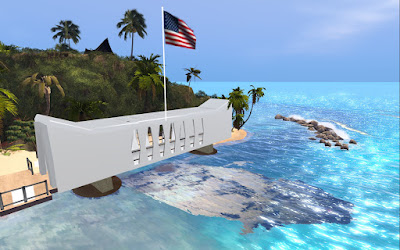 As it turns out, Oahu has a couple neighbors now, and the memorial can be seen from the
Pacific West sim by turning the draw distance way up, panning around, and waiting for the image to clear up. But stepping onto the Oahu sim will result in a warning to get off or be teleported away.

Beginning on December 9 presumably, the memorial can be found at Oahu (176/22/23). The reproduction of the real-life memorial to those who lost their lives on the USS Arizona on the attack on Pearl Harbor by the Japanese Empire. About half of the over 2300 killed in the attack perished on the ship. The memorial was online for several years, including for a Pearl Harbor 70th Anniversary memorial event in 2011. The sim would be down for several months last year until it was reopened in January this year.