Net Neutrality has become an issue in recent weeks when the Chairman of the FCC, Ajit Pai, released a report calling for the repeal of laws protecting it. The result was numerous protests from individuals. But corporations and organizations have also joined the fight calling for Net Neutrality's continued protection. On Tuesday December 12, Linden Lab joined the number of businesses in it's support. 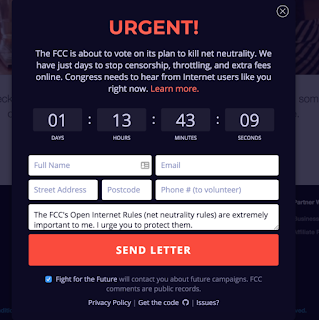 We at Linden Lab believe that net neutrality is extremely important. Lifting the FCC’s Open Internet Rules would not only jeopardize the experience of Residents using Second Life, but can also negatively impact all aspects of our online lives.
Later this week, Congress will vote on this issue, and we encourage Second Life residents to join us in calling on our representatives to preserve net neutrality.

To that end, we have joined the “Break the Internet” initiative, and if you visit SecondLife.com or login to Second Life today, you’ll notice a pop-up tool (snapshot below) that makes it easy to send a message in support of net neutrality. Of course, if you’d prefer not to use this, you can simply close the pop-up and login as usual, but we hope you’ll consider adding your voice to this important issue.

"Break the Internet" is a page that offers a number of ways to protest the move to remove Net Neutrality, from calling local representatives and senators, to spreading awareness, such as the following video.