Railroad Stop at the Newser Office 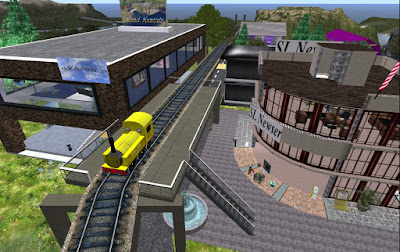 The work on the land of the Sunweaver community never seems to stop these days. Those going about the Sunweaver Estates have noticed railroad tracks in the Sunweaver Space sim for some time. In October, Cynthia Farshore told the Newser the railroad would soon be extended into Sunlight Bay. Earlier this week, the rail system was extended into HV Community. As the "Brandi's Intimates" store and the SL Newser office were the largest public locations at ground level, the railroad was laid between them on a bridge with a station there. 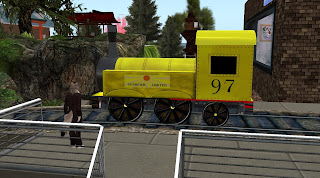 Laying the track and building the station required the taking down of one fountain as it couldn't be reduced in size. But no doubt the rail system will be an interesting touch to the sim.

The railroad tracks have been extended to the edge of the Sunny Beach sim. Getting the system through there and into Sunweaver Bay will require talks with the owner.

Correction: Earlier the Newser wrote that Cynthia Farshore's friend Shockwave Yareach was helping her build the railroad. He has since contacted us saying the work was all hers.