On Saturday December 2, There was a Trans-Siberian Orchestra tribute band performance at the Relay for Life's Christmas Expo. The real life band is known for two things: their modern twist to some classic Christmas songs, and the light show performed at their concerts. And it was the same thing with the tribute band on the Grid.

Get Here Early for The Amazing TransSiberian Orchestra @ SL Christmas Expo!  **  You've heard their music on the radio in RL... You may of seen them live... The band comprised of heavy metal giants from groups such as Megadeath, Savatage, Journey.. have put together a Christmas show that is second to none, and Mavendorf Entertainment is performing the famous Ghosts of Christmas Eve Show to Benefit the Relay For Life of Second Life! 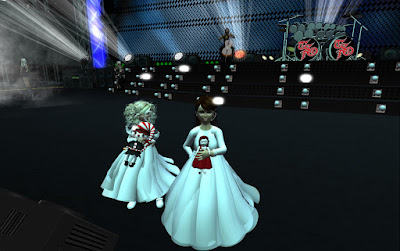 There were a number of performers, including child avatars for the choir music. Many tens of thousands of Lindens were raised, some people at times offering to match the amount donated in the next two to five minutes.

"The most magical thing about this night, we will now reiterate, is no matter where you are in life, it never is.. too late."

We thank you so much for being a part of such an amazing group!! Relay for Life and the Christmas Expo are beyond!!! YOU make tha difference by being here.. shopping (shop folks shop!!) building a snowman, buying a raffle and donating to a kiosk.. all our musicians donate their time !!

Don't forget to stop by the 2017 Christmas Expo this week.