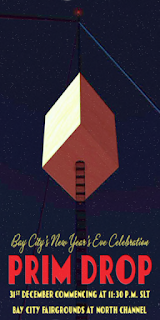 BAY CITY, SL (20th December, 2017) - Bay City, Second Life's® city by the bay,  is one again preparing for their annual "Prim Drop" on the evening of the 31st of December, with festivities commencing at 11:30 pm SLT within the Bay city Fairgrounds in North Channel.